Its easy to identify rat poop; they are skinny pellets that are about 3/8-inch-long and about 1/8 inch in diameter, rounded tips with a slight bulge in the center but not always. Fresh rat poop is dark brown in colour, and when they start ageing, they tend to get lighter. Rat poop resembles squirrel poop but is a bit thinner and probably darker than average.  In case you have spotted this type of poop in your households, in between walls, food packages, or in the attic, you have a rat living in your house.

Rats will normally poop in feeding or nesting areas. In case you find them, inspect the area or better yet call in a rat removal service. They are better equipped and more experienced in finding rats in your house. Rat poop is normally a sign of infestation in your house and you need to your local rat control Toronto company.

Rat dropping or feces are common in specific locations, and this is because rats will produce up to 40 droppings in a single night. Therefore, if you notice rat droppings in your house, it’s usually a clear indication that you have a rat infestation. Rat droppings are easily identifiable and are usually dark brown and resemble a grain of rice.

You need to careful when handling rat droppings; often they carry contagious diseases that could be harmful to humans, you could also be allergic to rats. Rat droppings often carry fur from rats and could be mixed with urine and saliva. If you are allergic to rat fur, avoid handling or cleaning out rat droppings when you spot them. Instead, call a rat removal professional to help you dispose of it. Since rat droppings are a sure sign of rat infestation, a professional could also help get rid of the rodents before they nest and cause havoc in your home.

Mouse poop ranges in size, but the best way to determine their size is to compare them to a grain of rice with pointed ends and varying colours depending on age and diet. Fresh rat droppings are normally black and will begin to turn brown over the week, eventually turning grey as it ages.

Fresh mouse droppings are malleable while old mouse dropping will crumble to touch. Its recommended that you never touch mouse or rat droppings with your hands. You can also easily judge the type of mouse problem you are facing by looking at the number of fresh pellets left in a single day.

Usually, the first sight of mouse droppings should reason enough for alarm. The moment you notice droppings around your house, start precautionary measures by inspecting your house for a mouse nest. A few mice could turn into a colony in a matter of weeks.

Norway rats and roof rats are the most common rats that are known to infest homes in Canada. Exterminators use rat poop to determine what kind of rat is present in your home, helping them determine the most effective technique to take them out. Compared to mouse poop. Rat poop is at least twice the size, with the Norway rats having a much bigger size than the roof rats.

The Norway rat poop will measure about ¾ of an inch in length and about ¼ of an inch in diameter. Their poop is rectangular in shape with blunt ends. Roof rat poop, on the other hand, is½ an inch and often share the same diameter as that of a Norway rat. Their distinguishing feature is their pointed tips and sausage like shape.

How to Identify Rat Droppings? 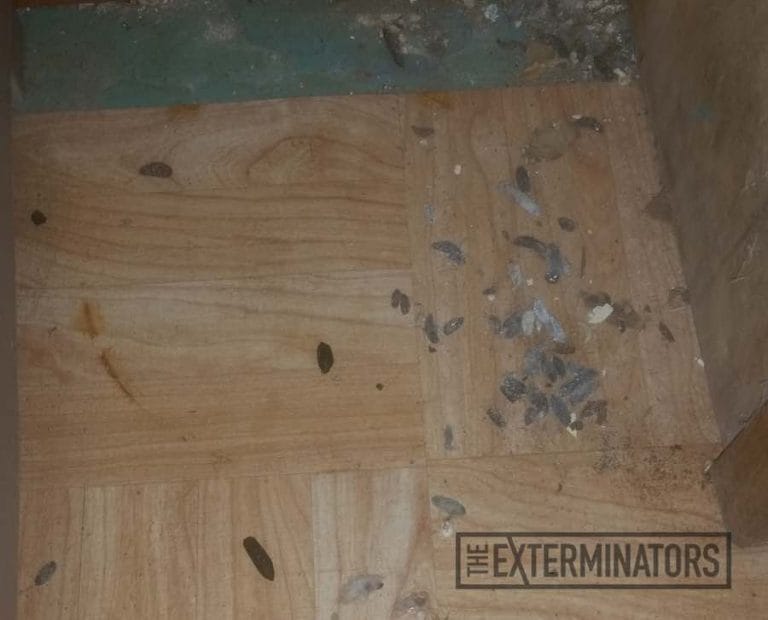 If you suspect that you have a rat problem in Toronto, droppings can provide useful clues as to what kind of rodent has invaded your home. It is imperative that you positively identify rats as the culprits before undertaking any extermination to guarantee a successful outcome.

The appearance of rat droppings may vary depending on the specific breed of rat you are dealing with such as roof rats or Norway rats. Generally speaking, you will rarely find rat droppings in a neat cluster. You are more likely to find random and dispersed droppings particularly around areas of high activity. This is because rats tend to excrete while on the move.

Rat droppings are typically spindle-shaped and long, about ¼ inch thick and ¾ inch long, again depending on the species.

Norway rats tend to have larger droppings about ¾ inches long. Roof rat droppings are about ½ inches long and look like a curved sausage. The latter is more scattered around compared to the Norway rat droppings which may be found in vague clusters of about 20.

While fresh, rat droppings are soft, dark in colour and may have a wet, glistening appearance. The droppings harden and have a crumbling appearance with time.

You are most likely to find rat droppings in basements, rooftops, garages, attics and sewers.

Rat droppings may contain diseases including salmonellosis, rat-bite fever, hemorrhagic fever and leptospirosis among others. Sighting the droppings is therefore not a matter to be taken lightly.

Begin by ventilating the room, opening all windows and doors for at least 30 minutes. The reason is to allow potentially contaminated air to clear out of the room. Wear a protective mask before you begin the cleanup.

Wear vinyl or rubber gloves and mix one part bleach and ten parts water. Pour the mixture into a spray bottle and wet the droppings and allow the mixture to sit for at least 5 minutes. Use paper towels to pick up and clean the droppings. Place the droppings in a plastic bag, seal tightly, place in a second bag and seal tightly. Avoid sweeping or vacuuming as this can make microscopic viruses airborne.

Do Rat Droppings Cause Health Problems? 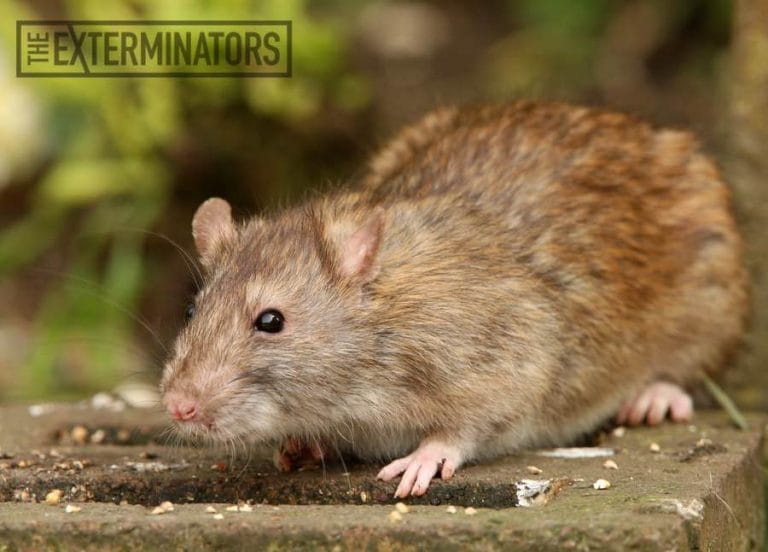 Seeing a rat is often frightening enough for some, but finding a rat in your home is even worse. Unfortunately, rats often find it beneficial to live among humans because that is where they can find the most food and water for survival.

However, rats create health problems for humans. In particular, rat feces can transmit different diseases to humans. Understanding what those diseases are can assist you in learning if you might be affected and the importance of calling your local rat control company.

Hantavirus Pulmonary Syndrome, also commonly called Hantavirus or HPS for short, is a rare disease carried by rodents. Not all rodents carry HPS, but because there is no way of knowing which ones do and which ones do not, it is best to avoid handling rats, their nests, or areas they soil with their droppings and urine.

If you are infected with Hantavirus, you will usually experience symptoms within one to five weeks. The first symptoms include fatigue, fever, and muscle aches. As time goes by, people often report additional symptoms, including:

Unfortunately, many of the symptoms associated with Hantavirus mimic flu symptoms. If you know that you have a rat infestation in your home, you will want to visit your doctor as soon as you experience symptoms. A doctor can confirm if Hantavirus is the cause of your illness.

Currently, there is no specific vaccine to protect against Hantavirus. Also, there is no specialized treatment. Instead, affected individuals should visit with their doctor as soon as possible. Many people often find themselves hospitalized during the respiratory distress phase. You will likely remain on oxygen until you heal and your symptoms pass.

Salmonellosis is yet another disease that can affect humans that come into contact with rat feces. People contract the disease via fecal to oral transmission. In other words, rat feces can contaminate food and drinks within your home. If you eat or drink contaminated items, it can lead to salmonellosis.

Infection is a rare occurrence, but that does not mean it cannot happen to you. It is best to know the symptoms associated with this disease so you can seek treatment immediately. Treatment is of the utmost importance because the disease can turn deadly. In very rare instances, death may occur with no prior signs of infection.

Although anyone is at risk of contracting the disease, children and adults with a compromised immune system face a greater risk of disease severity. Make sure you visit your doctor or your local emergency room as soon as symptoms arise.

Handling rats or coming into contact with food or water contaminated by rats can lead to a disease called rat bite fever. Typically, rat bite fever occurs if you receive a bite or scratch from a rat, hence the name. However, rat feces can contaminate food and drinks, which can also cause the spread of rat bite fever, also known as Haverhill fever.

Like many other diseases spread by rats, this one is also rare, but it can and does occur. In recent years, it seems rat bite fever is a more common occurrence. Experts suggest the rise in infected persons has to do with the fact that more people keep rats as pets. Also, urban areas, such urban neighbourhoods in Canadian cities like Toronto, complain of an upsurge in rat populations.

Construction and mild winters are partly to blame for the increase in rat populations. If you live in an area heavily infested with rats, it puts you at risk of developing rat bite fever. Make sure you visit your doctor as soon as symptoms arrive so you can receive the proper medical care.

The first symptoms that appear with rat bite fever may include nausea, headache, and fever. Within two to four days, you may also notice a bumpy, reddish coloured rash on your skin, particularly on the hands, that does not itch, and joints that become painfully swollen. Usually, symptoms appear within three to ten days of infection. In some cases, you may not display symptoms until three weeks after the infection occurs.

If left untreated, rat bite fever may worsen and cause potentially severe health complications, including:

If treated in a timely manner, the prognosis for healing is often good. Make sure you do not hesitate to visit your doctor or local emergency room at the first sign of illness.

Although leptospirosis spreads through rat urine rather than rat droppings, it is still worth mentioning. Rats often urinate when they defecate, which can lead to contamination and the spread of leptospirosis. The urine dries on the feces, and when you make attempts to clean the feces from an area, you disturb particles and put yourself at risk of developing leptospirosis.

Although some individuals with leptospirosis may have no symptoms at all, most suffer from symptoms that include:

It can take anywhere from two days to four weeks to experience symptoms. However, the infection usually leads to the abrupt onset of a fever. You should seek treatment as soon as symptoms arise. With treatment, it can take you three weeks to recover. If you ignore treatment, recovery can take months.

No matter which disease you face, each of them requires treatment from a medical professional. Seek medical attention as soon as symptoms arise rather than taking a risk.

It is not a good idea to touch or come into contact with rat droppings if you can help it because of the potential for disease. Call a professional rat control company in Toronto to perform the extermination and subsequent cleanup. The expert will also identify all potential entry points and seal them accordingly to avoid a future rat problem.

Call the Exterminators at 647-496-2211 or check our online shop for some rat control products.

Get a free quote

Joe is a professional pest control exterminator with over 15 years of experience and enjoys sharing his knowledge about different pests and how you can deal with them.